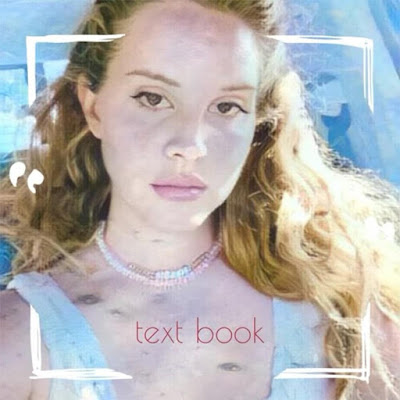 Text Book is a song by singer Lana Del Rey that was released on May 20, 2021. This is the third and final of the surprise release singles from Lana's upcoming album, Blue Banisters.
Here on "Text Book", Lana goes back to her country that first heard on her albums "Norman F***ing Rockwell" and "Chemtrails Over The Country Club".
This dreamy track finds the singer reminiscing about her self-discovery and first loves. She takes her listeners on a journey with her father and being blinded by luxury on the first verse with the lyrics:
I guess you could call it textbookI was looking for the father I wanted backAnd I thought I found it in BrentwoodIt seemed only appropriate you'd easily had my back
On the chorus, Del Rey starts connecting the dots between her father and her partner hoping that things will turn out differently for her singing:
You've got a Thunderbird, my daddy had one, tooLet's rewrite history, I'll do this dance with youYou know I'm not that girl, you know I'll never beMaybe just the way we're different could set me free
She makes a reference to Black Lives Matter as a sign of entering into a new way of activism with the lyrics:
And there we were, screamin', "Black Lives Matter" in a crowd
By the Old Man River, and I saw you saw who I am
Oh my gosh, you guys. Lana Del Rey did not come to play when she dropped these three gorgeous songs without any promotion or announcement whatsoever. Text Book is an awesome song and I liked the way that it sound from beginning to end.
I highly recommend that you listen to all of three of these track by Lana to kinda get the feel of her life story.
Buy, listen and stream Text Book by Lana Del Rey on Spotify, Apple Music, Deezer, YouTube and more:
https://www.iheart.com/artist/lana-del-rey-692502/songs/text-book-134872930/?autoplay=true
https://open.spotify.com/track/50J98YfyIUVLWbXoQZambN?autoplay=true
https://www.deezer.com/us/track/1378563822?autoplay=true
https://www.amazon.com/Text-Book-Lana-Del-Rey/dp/B0958374Z1
https://music.apple.com/gb/album/text-book-single/1568121778
at June 12, 2021 No comments: 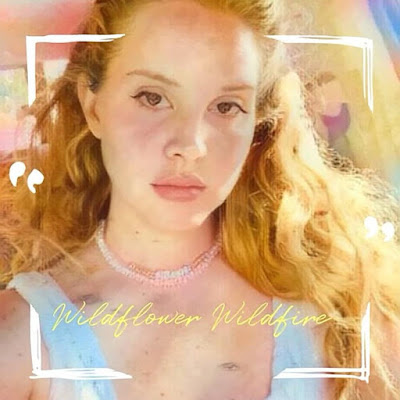 Wildflower Wildfire is a song by singer-songwriter Lana Del Rey that was released on May 20, 2021. It is the second one of the first three singles that was released simultaneously for Del Rey's upcoming eight studio album, Blue Banisters.
The piano driven track, produced by Mike Dean, lyrically talks about Del Rey comparing her life to nature and wildfire.
On the first verse, Del Rey wants to talk about a relationship with her boyfriend singing:
Here's the deal'Cause I know you wanna talk about itHere's the dealI promise you, like, a million tomorrows
Lana finds herself wandering alone for the desire of company and warmth as she sings on the pre-chorus:
Baby I, I, I, I've been runnin' on stardustAlone for so longI wouldn't know what hot fire wasHot fire, hot weather, hot coffee, I'm better with youIt's strange, but it's true, darling
Then, the singer get really personal talking about her strained relationship with her mom, which is something that she has never mentioned in any of her music, and her struggles with mental health on the second verse with the lyrics:
My father never stepped inWhen his wife would rage at meSo I ended up awkward but sweetLater than hospitals and still on my feetComfortably numb but with lithium came poetry
Lana doesn't want to turn into a wildfire like her mother once was, but she wants to grow into a beautiful and strong wildflower instead singing on the chorus:
Not to turn into a wildfireTo light up your nightWith only my smile and nothing that hurtsBaby, I run like a wildflowerI live on sheer willpowerI promise that nothing will burn you
All I can say is that I am absolutely amazed by Miss Del Rey's artistry on "Wildflower Wildfire". It's like she pulled back some layers of her life that we didn't know about until now. The lyrics and production on this is what makes this song so touching.
Buy, listen and stream Wildflower Wildfire by Lana Del Rey on Spotify, Apple Music, YouTube, Deezer and more:
https://www.iheart.com/artist/lana-del-rey-692502/songs/wildflower-wildfire-134873867/?autoplay=true
https://open.spotify.com/album/761oXL0XFzpRE36GF1wn89?highlight=spotify:track:5WhzJEUErG4gdSqxNCB9ED
https://www.deezer.com/us/track/1378563752?autoplay=true
https://www.amazon.com/Wildflower-Wildfire/dp/B09582VZ1C
https://music.apple.com/us/album/wildflower-wildfire-single/1568121964
at June 12, 2021 No comments: 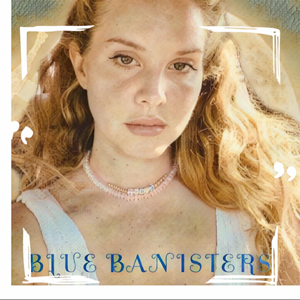 Blue Banisters is a song by singer Lana Del Rey that was released on May 20, 2021. It serves as one of the three lead singles off of her upcoming eighth studio album, Blue Banisters.
Blue Banisters is a midtempo indie song that talks about the singer's personal life. She opens up the song with a country reference singing:
There's a picture on the wall of me on a John DeereJenny handed me a beer, said, "How the hell did you get there?"
On the second verse, she mentions some flowers that were given to her by her former lover with the lyrics:
There were flowers that were dry, sittin' on the dresserShe asked me where they're from, I said, "A place I don't remember"Oklahoma (oh)
The Oklahoma reference in this song is rumored to be about Lana's ex-boyfriend Sean Larkin, who works as a police officer in Tulsa, Oklahoma.
Del Rey then moves on to talking about the man who loves to paint her life blue as she sings on the chorus:

Said he'd come back every MayJust to help me if I'd paintMy banisters blueBlue banisters, ooh

First of all, I am a huge fan of Lana Del Rey's music. Her voice is so beautiful and elegant. The lyrics, production and the cover are all so good. Blue Banisters just proved that Lana Del Rey is ready to release a new era with her music. 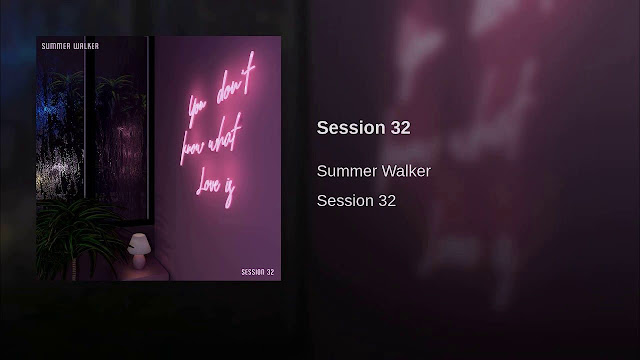 Session 32 is a song by Atlanta singer-songwriter Summer Walker that was released on April 4, 2018.

This raw acoustic track finds Walker confronting an ex-boyfriend who has failed to show his unconditional love to her.

Summer begins to open up the song singing:


Threw away your love lettersI thought it'd make me feel betterI finally got you out my bedBut I still can't get you out my head, ooh


Summer continues to let her former lover have it on the chorus with the lyrics:

Before ending the song with these heart-wrenching lines as she sings:

First at all, I absolutely love this song by Summer Walker. Like, I play Session 32 on repeat and it never gets old. The only problem that I have it is that I wish that it was longer. I really wanted to hear more from Summer. But overall, I love the lyrics, production and the meaning behind this beautifully written track.

I had first saw Summer performing Session 32 at the 2020 BET Awards. You can watch her full performance below in case you missed it: 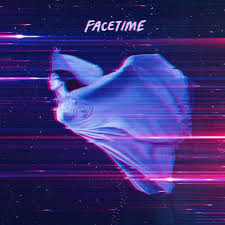 FaceTime is a song by singer-songwriter Kira Kosarin that was released on June 24, 2020. It is the fourth and final single from the singer's upcoming EP Songbird.

FaceTime is described as a love song that talks about falling head over heels for someone after meeting them on the app of the same name.

Kira kick things off on the first verse with the lyrics:


Now, the singer finding herself having second thoughts about everything that she told this person on FaceTime on the chorus singing:

Buy and stream FaceTime on Spotify, Deezer and SoundCloud:


Pre-save or add Kira's Songbird when it comes out on July 15th:


Check out my other reviews on Kira's song that she has released so far:

Watch the official lyric video for FaceTime below: 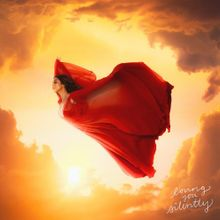 Loving You Silently is a song by singer and actress Kira Kosarin that was released on June 3, 2020. It serves as the third single from Kosarin's upcoming project Songbird.

Lyrically, the song is about Kira dealing with a breakup and reminiscing about how she will always carry a part of her former lover on the inside of me despite the pain that he has caused her.


Kosarin opens up on the first verse with:

You always said I'd break your heart (one day, one day)Ain't it funny how the roles reversed?I should've known it from the start (no way, no way)I was never gonna put me first

Then, the singer starts to show her vulnerable side singing on the pre-chorus:

There is a part of Kira that still loves her ex-boyfriend and wishes that they could've made their relationship work as she sings on the chorus:

So I'll go on, loving you silentlyYou're not the one but you're still a part of meWe never won, and never even really got to try

And don't forget to pre-save or pre-add Kira's Songbird EP when it drops on July 15th:

Check out the quarantine style music video for Loving You Silently below:

KIra Kosarin - Something to Look Forward To review 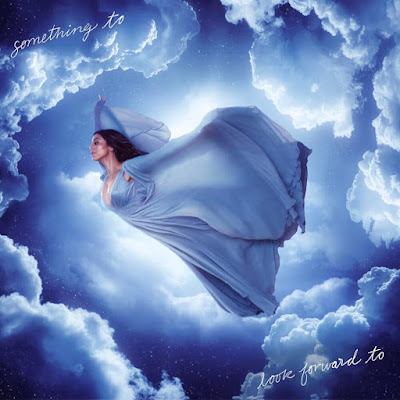 Something to Look Forward To is a song by singer Kira Kosarin that was released on May 14, 2020 through AWAL. It is the second single for Kosarin's upcoming EP Songbird.


Something to Look Forward To is an emotional pop song that finds the singer being in dark place in her life and she really needs something to look forward to so that she doesn't have to feel sad anymore.

Kosarin sings on the first verse:

Then Kira continues on the chorus with the lyrics:


I love how Kira is showing us her vulnerable side in "Something to Look Forward To" through the lyrics and production of this song with her mesmerizing vocals.


This is definitely one of my favorite tracks from the Songbird era along "First Love Never Lasts". Thank you so much Kira for blessing us with this beautiful masterpiece.

Buy, stream and download Something to Look Forward To on Apple Music, Google Play, Spotify, YouTube and more:

Check out the official music and lyric video for STLFT below:

Text Book is a song by singer Lana Del Rey that was released on May 20, 2021. This is the third and final of the surprise release singles fr...